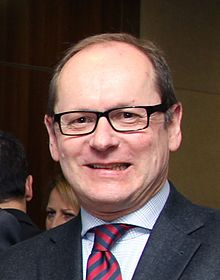 Gerald Groß (* 1964 in Vorau, Styria ) is an Austrian media coach and former journalist and TV presenter. He studied German language and literature at the University of Vienna and began his journalistic work as a freelancer for newspapers and news magazines in 1987. In 1988 he started to work for the ORF, first at the ORF Studio Burgenland. In 1997 Gerald Groß joined the radio station Ö1 in Vienna, a year later he became news director of the radio station Ö3. 2001 he became a moderator of the newscast „ZIB 2“ and from 2002 he moderated the main news program "ZiB 1" and the science magazine „Modern Times“. In 2011 he left the ORF, founded the company gross:media and became known as an independent media coach and moderator. Gerald Groß is married and has two children. Publications: We communicate to death. Survival in the digital jungle. Ueberreuter, Vienna 2008. Making News. Behind the scenes of TV news. K & S, Vienna 2013.

Gerald Gross on the Schedule 2022